Bion Iseijin will perform at the screening of the documentary film “Irradiated” directed by Rithy Panh (Cambodia)!

Tweet
A Cambodian director, Rithy Panh shot the documentary film "Irradiated" in Hiroshima last year. At the HIFF, the artist Bion Iseijin, who appeared in this work, will perform. "Irradiated" is highly acclaimed and won the Berlinale Documentary Award 2020 at the 70th Berlin International Film Festival. 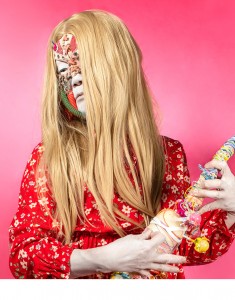 Bion Iseijin
In 1998, Bion Toyoshima submitted his acoustic work, “Sense of Sound” to the Okamoto Taro Award for Contemporary Art (TARO Award). His performance, watched by Toshiko Okamoto, secretary and adopted daughter of the late Japanese avant-garde artist, Taro Okamoto, led to the creation of Bion Isejin, Toyoshima’s avant-garde performance art alter ego. Bion Isejin—an alien on the star of beautiful sounds—wears “Artist Training Armor,” a spring-loaded costume designed to resist the Earth’s gravity and denote the challenges faced by earthlings. Isejin performs to the Bion Machine, which generates beautiful sounds. In 2002, Toyoshima released “Bion Flash,” a musical composition ridiculing world leaders’ interests in nuclear testing. In 2009, he created the group “Bion Pink Dancers,” recruiting a team of back dancers incapable of dancing. In 2013, he began performing “Super Mitsuko,” a story depicting love with a doll pulled from the ruins of the atomic bomb. He later took this performance abroad to venues in Taiwan, Korea, Cambodia, and more. His collaboration with the director Rithy Panh in 2019 led to an appearance as a ghost in the 2020 Berlinale Documentary Award winning film, “Irradiated.” In 2020, he also created and released on Instagram the character “Mask Girl,” a self-portrait exhibiting resilience under the COVID-19 pandemic. He is now active with various presentations and exhibitions, which, in addition to performance art, include sketches and film production.

« Special screening of works with the theme of Hiroshima which stars Kaori Momoi and is directed by Nobuhiro Suwa (from Hiroshima)The film “Hiroshima Piano” was created from an encounter with a piano tuner, Mitsunori Yagawa, who delivers the sounds of the A-bombed piano throughout Japan »