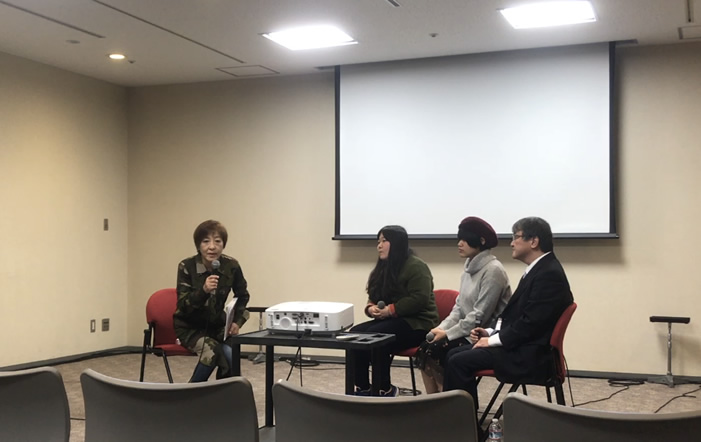 On November 23rd (Sat), screening of 3 works of award winners in the 7th Annual Competition of Art in Hiroshima, at NTT CRED Hall No. 2, starting at 11:00. Award winners, part in a talk show right after the screening. The interviewer was Shigeyo Kimura, a took gallery owner in Hiroshima.
Each work described sceneries in our daily lives. When Ms. Kimura asked about secret stories and the charm of their films, each director explained as below;
Mr. Yazawa (director of “HIROSHIMA: 9 P.M.”): “My favorite movies are those of Dario Argento, I love the way he depicts night scenes. I’d like to show night sceneries in Hiroshima as fascinating as he does. That’s why I made this. Shooting was all carried out on iPhone, and I edited it with apps on an iPhone. It suggests we all can make a film wherever we are.”
Ms. Yamato (director of “Okogamashi_koto_dattanda”): “It describes the friendly relationship between characters. I suppose there are many people feeling sympathy for them. We struggled to bridge gaps between my thoughts and those of the actors.”
Ms. Gohara (director of “enemy”): “My film focuses on vice. I usually draw an illustration, but this time I tried to express things instinctively. I would have liked to focus on the characters’ motion, but it seemed that I needed further efforts to realize that. I painted every single cut of 300 animation cells. I had to make it sure that no lines slipped out of their positions, or they would be scattered.”

« (日本語) リチャード・レイモンド監督が平和の子の像を訪問しました“you are here, you were here” »