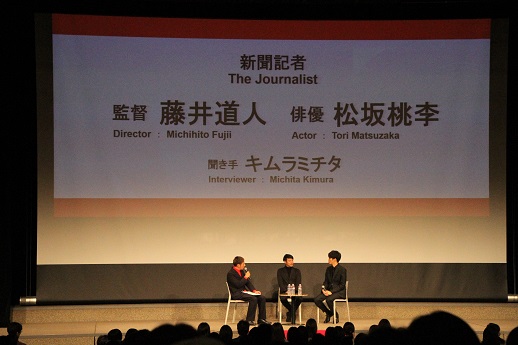 On Saturday November 23, there was a film showing and a talk show about the film, “The Journalist” at NTT Cred Hall No.1 at 18:00, welcoming Mr. Michihito Fuji, the film director, Mr. Tori Matsuzaka, the actor of the film and Mr. Kimura Michita, a free host in Hiroshima.

At first, Mr. Matsuzaka said, “I’ve had a relationship with Hiroshima personally, and sometimes I get energy from here, so I’m really glad to join this film festival” and Dir. Fuji, whom has had a relationship with this film festival since 2011 (at that time, the name was Damah International Film Festival) said, “it’s a great honor for me to come back Hiroshima with Mr. Matsuzaka.” Mr. Kimura welcomed the two and responded, “welcome back!”

The film is based on a nonfiction work by Isoko Mochizuki, a reporter of Tokyo newspaper. This film describes modern Japan, which has a democracy merely for form’s sake, tuning pressures on people, and public opinion which turns over easily. Ms. Shim Eun-Kyung plays a young woman journalist and Mr. Matsuzaka plays young man who is one of the elite journalists and this film shows how they struggle in such a modern Japan.

It’s been 5 months since the release in June 2019. Mr. Matsuzaka said that many people had asked him about the last theme. The theme is different from the original one and Mr. Fuji talked with Mr. Matsuzaka and got some advice.

“Sugihara”, whom Mr. Matsuzaka played, suffered from a conflict between a justice that he has in himself and a justice that his organization has. Mr. Matsuzaka said that, “through our lives, we must have many choices, but the important thing is how we choose one thing by seeing, hearing, and feeling by ourselves. With this film, I confirmed these things again and I thought it’s interesting.” 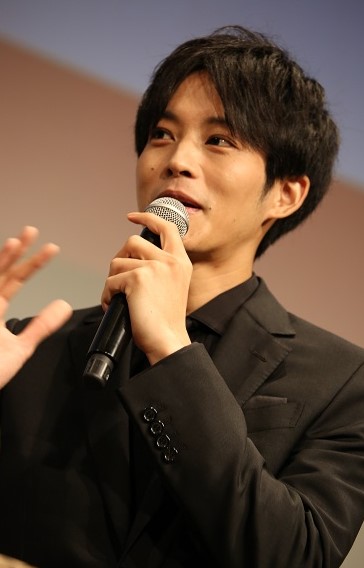 Mr. Matsuzaka was surprised about Ms. Shim Eun-Kyung. She mastered Japanese in only two years and she could have communication with the director by herself.

Two major role actors played an emotional and tense performance and at the end of the film showing, the hall resounded with applause from the audience. 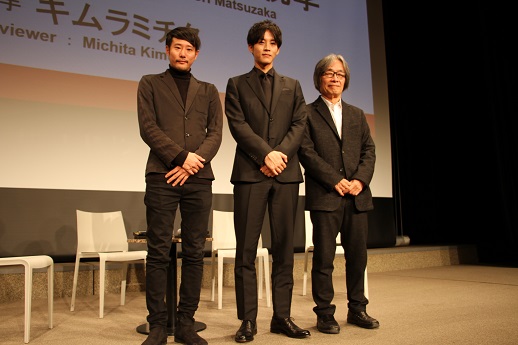