＜STORY＞
Inspired by real events, “Bestia” enters the life of a secret police agent in the military dictatorship in Chile.The relationship with her dog, her body, her fears and frustrations, reveal a macabre fracture in her mind and a country. 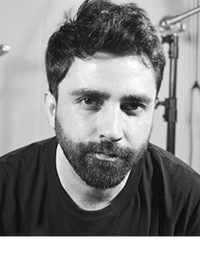 Hugo Covarrubias
Hugo Covarrubias, (Santiago, 1977): stop motion director and animator. He is the founder of the Maleza
theater company, pioneers in mixing theater with animation, where he co-directs the plays “Maleza” and
“Un Poco Invisible”. Director of the short films “El Almohadón de Plumas” and “La Noche Boca Arriba”. With
Zumbástico Studios, he has directed the series “El Ogro y el Pollo”, “Horacio y los Plasticines” and is co-
creator and director of the series “Puerto Papel”. He is currently the art director of the series "Zander"
and is directing his third short film "Bestia."