＜STORY＞
In the dark swamps of a nocturnal forest, a group of gleaming axolotls is in heat, nuzzling and nibbling one another’s limbs. Soon a much larger, two-legged forest-dweller encounters the lustful group and reaches down to gobble one of the small shimmering creatures. His plump friends begin to partake as well and a feast begins. While dawn is slowly breaking, a cheerful game begins higher up in the branches. 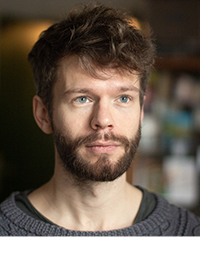 Jonatan Schwenk
Jonatan Schwenk, born in Germany in 1987, is an independent
filmmaker/animator, sound designer and storyboard artist currently
based in Berlin.
As a graduate from University of Art and Design in Offenbach and
former guest student from Kunsthochschule Kassel, he focuses on
combining various animation techniques into hybrid forms.
His animated short “Sog“ received nearly 40 awards and mentions
(including the Annecy Cristal for a graduation film) and has been
screened at renowned film festivals around the world, including
SXSW, Palm Springs ShortFest, Annecy, Ottawa, Zagreb and
Flickerfest, where it qualified for the Academy Awards.
As an animator and sound designer, his work has been selected
twice for the Berlinale, where he was also chosen as a “Berlinale
Talent” in 2020. Schwenk also contributed the sound design for
“Cops & Robbers”, directed by Florian Maubach, which won the
German Short Film Award in 2018, as well as for “Rules of Play”
by Merlin Flügel, which received a Cristal at Annecy in 2019.