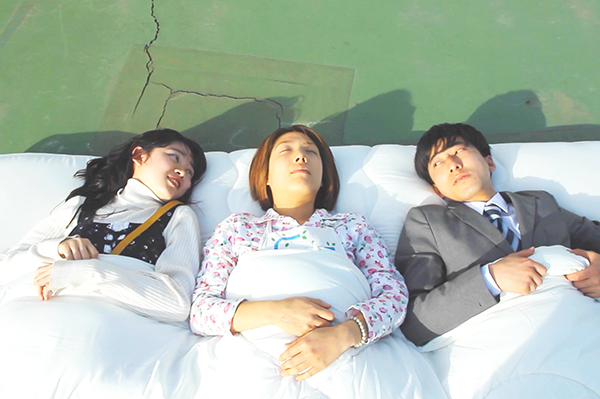 ＜STORY＞
Summary Marino sleeps so much she’s got bedsores. When she learns that Mamoru, a regular customer at the coffee shop she works part-time at works for a company that sells beds, she heads out to buy one. However, from the moment she uses it, weird and wonderful things start to happen, slowly throwing her quiet life into turmoil. Strange shadows come to life, dancing in unimaginable ways. She unexpectedly meets her childhood friend, Minori, who recants memories she has no recollection of and more.

＜COMMENTARY＞
“Floating Borderline” is a nostalgic yet new exploration of the liminal space between sleeping and waking, between yesterday and today. Director SUMIMOTO Naoko, an active illustrator and columnist, marks a new phase in her career with the release of this, her first feature-length film. Following its first screening at Japan Art Center 12th Movie Grandprix, the unique manner in which it speaks to viewers’ sensibility has created a buzz among audiences at the Image Forum Young Perspective 2020, the 21st Tama New Wave, and more. When Director SUMIMOTO Naoko, who loves hitting the pillow, was told, “You’re young. Make the most of your days off. Get up and out of the house,” she couldn’t help but question the logic behind this statement. Inspired to present a rebuttal, she devoted the next four years to creating a film depicting the lives of people who take pleasure in sleeping their way through life. The script that emerged not only draws on the personality and real life experiences of the protagonist, KAWASHIMA Marino, but was also written with her in mind. The film features intimately nostalgic images of Kita Ward in Tokyo, reflecting Marino’s sentimental attachment to its traditional shopping districts and restaurants. It also features priceless and rare images shot from inside of Marusan Cotton Industry in Takasaki, Gunma Prefecture, the bed-making factory where some of the characters are employed. “Floating Borderline” represents KAWASHIMA Marino’s debut as an actor. Her performance and unique persona that come through in this film have attracted a lot of attention, raising interest in her upcoming lead performance in KUROSAWA Yukinori’s “Garden Sandbox.” Artist and model SUZUKI Minori stars alongside Marino, playing the role of Minori, Marino’s childhood friend. ONOUE Takahiro—a unique actor known for his work on the underground stage—joins Marino and Minori on the screen, playing Mamoru, a pivotal character. The artists Noppo no Goonie, responsible for the music in films “Village on the Village” and “Necktie,” once again fill the screen with musical color. 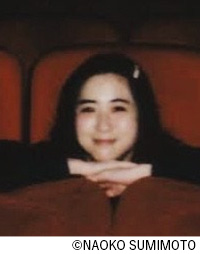 SUMIMOTO Naoko
SUMIMOTO Naoko, born in Hiroshima in 1989, specialized in printmaking at Tama Art University. After graduating, she developed her talents as an illustrator. An example of which can be seen in the illustrations and bindings produced for KANEKO Yu’s 2020 book “Introduction to World Cinema.” She is also known for her work on the online magazine ‘Filmground,’ which she not only oversees the running of but also actively contributes to. Her interests lie in writing essays and drawing illustrations that depict the moments when life and film interconnect. Her various talents, skills and interests combine to create a unique filmmaking style that is on full display in her feature-length film “Floating Borderline.”